Born
1675
Llanfihangel Tre'r Beirdd, Anglesey, Wales
Died
1 July 1749
London, England
Summary
William Jones was a Welsh mathematician who corresponded with many of the important English mathematicians of his day. 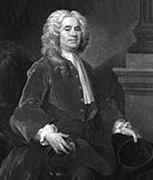 William Jones' father was Siôn Siôr. An obvious question would be: why was his father not named 'Jones'? The answer is simple, he was named Jones since this is the English version of the Welsh Siôn. William's mother was Elizabeth Rowland who was from Llanddeusant in the island of Anglesey. William was born on a farm in Anglesey and the family moved to Llanbabo on Anglesey, then moved again after the death of William's father. The family were poor and William attended a charity school at Llanfechell about 3 km from the north coast of Anglesey. There his mathematical talents were spotted by the local landowner who arranged for him to be given a job in London working in a merchant's counting-house.

This job saw Jones serving at sea on a voyage to the West Indies, and he taught mathematics and navigation on board ships between 1695 and 1702. He was serving on a navy vessel which was part of the British-Dutch fleet under Sir George Rooke and James Butler, Duke of Ormonde, which destroyed a Franco-Spanish fleet in Vigo bay off northwestern Spain in 1702. Navigation was a topic which greatly interested Jones and his first published work was A New Compendium of the Whole Art of Navigation published in 1702. In this work he applied mathematics to navigation, studying methods to calculate position at sea.

After the battle of Vigo, Jones left the navy and became a teacher of mathematics in the coffee houses of London. This may seems strange but in fact at this time coffee houses were sometimes called the Penny Universities because of the cheap education they provided. They would charge an entrance fee of one penny and then while customers drank coffee they could listen to lectures. Different coffee houses catered to specific interests such as art, business, law and mathematics. Jones was able to make a living lecturing in coffee houses such as Child's Coffee House in St Paul's Churchyard.

Soon he was employed to tutor Philip Yorke, who was later to become Baron Hardwicke of Hardwicke. This was an important position for Jones since Yorke, after a legal career, entered parliament becoming solicitor general (1720), attorney general (1724), lord chief justice (1733), and lord chancellor (1737). Jones tutored Yorke for about three years. He published Synopsis palmariorum mathesios Ⓣ in 1706, a book based on his teaching notes intended for beginners. It included the differential calculus, infinite series, and is also famed since the symbol π is used in it with its modern meaning. In 1709 he applied for the position of master of Christ's Hospital Mathematical School and supplied references written by Newton and Halley. He failed to obtain the position so continued lecturing in the coffee houses of London.

Although of little importance as a research mathematician, William Jones is well known to historians of mathematics since he corresponded with many 17th century mathematicians, including Newton. He was, however, elected a Fellow of the Royal Society in 1711. Jones then served on the Royal Society committee set up in 1712 to decide who had invented the infinitesimal calculus, Newton or Leibniz. We should now describe how Jones came to be considered an important Newton supporter in the dispute. (The Royal Society made sure that only strong Newton supporters served on their committee!)

Through lecturing in the coffee houses, Jones came in contact with leading scientists of the day such as Brook Taylor and Roger Cotes. John Collins, famed for his correspondence with a wide range of scientists, had died in 1683 and in 1708 Jones acquired his mathematical papers. These included transcripts of Newton's manuscripts, letters and results obtained with the method of infinite series which Newton had discovered in about 1664. Newton had written up these results in De analysi Ⓣ but they had not been published. With assistance from Newton himself, Jones produced Analysis per quantitatum series, fluxiones, ac differentia Ⓣ in 1711 although it should be noted that this first edition of 1711 did not record either Newton's name nor that of Jones. As an appendix to this work Jones added Newton's Tractatus de quadratura curvarum Ⓣ which was a shortened version of the work on analytical calculus which Newton had written in 1691. The second edition of Analysis per quantitatum Ⓣ published in 1723 did contain a preface written by Jones. Another contribution made by Jones towards publishing Newton's work relates to the Methods fluxionum Ⓣ, written by Newton in 1671. Newton had tried to get it printed over a period of five years but finally gave up in 1676 when Cambridge University Press rejected it. Jones made a copy of the original Latin, giving it the title Artis analyticae specimina sive geometria analytic Ⓣ and it was this version which was eventually published. In 1731 Jones published Discourses of the Natural Philosophy of the Elements.

We left our description of the events in Jones' life after he was unsuccessful in obtaining the mastership of Christ's Hospital Mathematical School. He had, before this, married the widow of his employer in the merchant's counting-house. In addition to his coffee house role he also acted as a tutor to George Parker, son of the future earl of Macclesfield, a position he obtained since his former pupil Philip Yorke was a friend of George Parker's father. Jones was long associated with the Parker family and lived for long spells at their castle at Shirburn. He was greatly helped by his friendship of Philip Yorke and George Parker, particularly after he lost all his money when the bank in which his money was invested collapsed. His two former pupils were by this time men of great influence and were able to obtain various positions for Jones which provided him with an income without requiring any real work.

Jones' first wife died and he remarried several years later to Mary Nix on 17 April 1731. She was 25 years old and Jones was 56 at the time of their marriage. They had three children, two of whom survived to adulthood: Mary born in 1736 and William born 10 years later. On his death Jones left a large collection of manuscripts and correspondence which it appears he had intended to publish as a major piece of work. There are many notes and copied parts of original manuscripts to which he had access. Wallis writes in [2]:-

His collection of some 15,000 books was considered to be the most valuable mathematical library in England and was bequeathed to George Parker, the second earl of Macclesfield. His papers were not in the bequest; nevertheless many are at Shirburn, where they have remained (1995) with access extremely restricted. Almost the only permitted publication has been those papers contained in the two-volume Rigaud Correspondence. Among Jones's manuscripts was another projected mathematical book, which his son, Sir William, had intended, but failed, to publish.

Other Mathematicians born in Wales
A Poster of William Jones

Other pages about William Jones:

Other websites about William Jones: