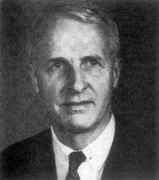 Garrett Birkhoff's father was G D Birkhoff who also has a biography in this archive. Garrett was educated at home until he was eight years old when he began to attend school. This first school was a public grammar school (public school here is the American meaning so is the opposite of a private school) which he attended for three years then, rather than enter high school at this young age, he spent a year enjoying himself playing sports and maturing before entering Browne and Nichols school at the age of twelve. Unlike his first school, Browne and Nichols was a private school.

At Browne and Nichols high school he had an excellent mathematics teacher in Harry Gaylord who had written a textbook with Bôcher. Again, as at his primary school, Garrett progressed very rapidly and despite going to Europe with his parents during his third year of study he was still ready to take the examinations a year early. His parents had encouraged him to do this because they were going on a major year long tour and so, after passing the examinations, Garrett attended a boarding school at Lake Placid for a year, spending much time on sport, before he entered Harvard University in 1928.

Before he entered Harvard, Birkhoff's father pressed him to decide on what profession he would eventually follow. That was when [2]:-

Garrett's father, G D Birkhoff, advised him to study mathematical physics and Garrett took undergraduate courses with this aim in mind. He attended a course on potential theory given by Oliver Kellogg which gave him a good understanding of differential equations. He had already attended a course on analytical mechanics given by Kellogg on his first year of study. A course by E C Kemble on quantum mechanics as well as courses on Lebesgue integration and topology gave him a broad education in mathematics. With lecturers such as Morse and Whitney, Birkhoff certainly had inspiring teachers at Harvard. He learned mathematics in addition to the courses he took, for [2]:-

... as a senior, I secretly discovered finite groups in the library, and fell in love with them.

Birkhoff graduated from Harvard in 1932 and was awarded a Henry Fellowship to study at Cambridge University in England. At first he was supervised on mathematical physics at Cambridge but, with a growing interest in abstract algebra, he changed supervisors to work with Philip Hall. Birkhoff published a joint paper will Hall, On the order of groups of automorphisms which appeared in 1936. From Cambridge Birkhoff went to Munich for a month in July 1933 and worked on his own on group theory, but while he was there he visited Carathéodory who pointed him towards van der Waerden's algebra text and Speiser's group theory book.

Returning to the United States, Birkhoff was a member of the Society of Fellows at Harvard from 1933 to 1936, and then he was appointed as an instructor at Harvard in 1936. He worked on two important texts. The first to be published was Lattice Theory which appeared in 1940. The second was his famous work Survey of Modern Algebra written jointly with Mac Lane. Mac Lane had been at Harvard during 1934-36 and in 1937 Birkhoff taught his first undergraduate course on abstract algebra. When Mac Lane returned to Harvard in 1938 he took over teaching Birkhoff's undergraduate algebra course, then Mac Lane took the course back in 1939. A joint book growing out of these courses was the natural outcome and Survey of Modern Algebra was published in 1941.

Kaplansky wrote about the importance of the text:-

"A Survey of Modern Algebra" opened to American undergraduates what had until then been largely reserved for mathematicians in van der Waerden's Moderne Algebra, published a decade earlier. The impact of Birkhoff and Mac Lane on the content and teaching of algebra in colleges and universities was immediate and long sustained. What we recognise in undergraduate courses in algebra today took much of its start with the abstract algebra which they made both accessible and attractive.

During World War II Birkhoff became involved in applied mathematics again. Perhaps this is rather misleading for Birkhoff did not consider this work closely related to the mathematical physics which he had started out on. He said [2]:-

This involvement in engineering mathematics came through a committee which he was on together with included Morse and von Neumann. They studied devices to calculate the distance to a target using radar echoes. Later Birkhoff was involved in war work at the Ballistic Research Laboratory at the Aberdeen Proving Ground investigating the effectiveness of exploding shells. Still later a wartime project with the Navy led him into investigating bouncing bombs on water and shock waves around projectiles.

The outcome of this last piece of war work was the texts Hydrodynamics (1950) and a few years later Jets, Wakes and Cavities (1957). The first of these grew out of lectures he had given at the University of Cincinnati aimed at showing that [2]:-

... hydrodynamics is not what Lamb thought it was.

Birkhoff's work also took him into computing and his friendship with von Neumann led to many interesting discussions on this topic. Computational methods certainly came to the fore when he worked as a consultant for the Westinghouse Corporation in beginning in 1954. This led to Birkhoff's interest in numerical linear algebra.

Another piece of consultancy work led Birkhoff into yet another area of mathematics. This is explained in [6]:-

Garrett began his consulting work with General Motors Research in 1959. One of the problems posed there was the mathematical representation of automobile surfaces in order to exploit the then new numerically controlled milling machines for the cutting of dies: these dies were needed for stamping of the outer and inner panels of automobiles. Garrett was quick to recommend the use of cubic splines (i.e. piecewise cubic polynomials with two continuous derivatives) for the representation of smooth curves.

In 1969 Birkhoff was appointed George Putnam Professor of Pure and Applied Mathematics at Harvard. He held this post until he retired in 1981. He published another important text, jointly with Thomas Bartee, in 1970 on Modern Applied Algebra. Of the book, which covers applications such as coding theory, Birkhoff said [2]:-

The book was Bartee's idea, and he selected the applications. We wrote it during the late 1960s.

Birkhoff received many honours. He was awarded honorary degrees by six universities world-wide, he was elected to the National Academy of Sciences and the American Academy of Arts and Sciences. The article [7] lists 50 students who studied for their doctorates under Birkhoff, while Mathematical Reviews list 229 papers authored by him.
Other Mathematicians born in USA
A Poster of Garrett Birkhoff

Other websites about Garrett Birkhoff: