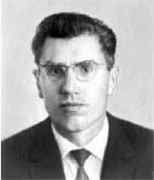 Aleksei Kostrikin was the tenth and youngest child of a peasant family [4]:-

His outstanding village schoolteachers imparted to him a love of knowledge and, in particular, mathematics. In 1947 Kostrikin entered Saratov State University. Being one of the best students there, he was transferred in 1951 to the Department of Mechanics and Mathematics at Moscow State University from which he graduated in 1952.

At Moscow State University he began a long-lived association with the young professor I R Shafarevich, only six years his senior, and also began his research interests in p-groups and Lie algebras which were to dominate his research career. Kostrikin worked with Shafarevich as a post-graduate at the Steklov Mathematical Institute of the Academy of Sciences of the USSR and successfully submitted a candidate's dissertation (equivalent to a Ph.D.) there in 1956.

Kostrikin joined the staff of the Steklov Institute in 1956 and continued his association with the Steklov Institute for the rest of his career. He also taught at the Faculty of Higher Algebra at Moscow State University beginning in 1963, becoming the head in 1977 and serving in this capacity for 23 years, from 1977 to 2000. Kostrikin was recognized as an outstanding teacher and mentor to many young mathematicians. He supervised over 30 candidates in the physical and mathematical sciences, including many who went on to distinguished careers in mathematics. He maintained close relations with many of these graduate students and carried on joint work with many of them for years [4]:-

Despite his illness, he continued working with graduate students up to the last days of his life.

He was both an excellent organizer and writer who, in 1977, authored a widely-used textbook Introduction to algebra (Russian) for university students that has been translated into many languages. J L Brenner writes:-

This text, intended for 19- or 20-year old students, includes such topics as: general properties of mappings and of binary relations; some properties of simple groups; theory of representations; elements of the theory of finite fields; fields of algebraic numbers; as well as traditional subjects in a first course in algebra.

Matrices, rings, fields, groups, polynomials, number theory, linear groups, and modules receive considerable attention. The rotation group SO(3) even has a section. Important results are given in examples in the text, and in 200 exercises (with hints and indications). Considering the youth of the university and pedagogical institute students to whom it is addressed, the book is both demanding and challenging. Also, abstraction for the sake of abstraction is wisely postponed; the concrete examples are more helpful at this stage.

This textbook was rewritten from scratch and republished in 1994. Kostrikin writes in the Foreword about his ideas on algebra and how it should be taught. As it gives a good indication of Kostrikin's thoughts we give a fairly lengthy quote:-

The necessity of giving a unified presentation of standard course material in algebra, linear algebra and geometry has been felt for a long time. In any case, our textbook Introduction to algebra dating from almost 20 years ago was considered from the very beginning only as the first step in an integrated approach. Algebra is a living branch of mathematics which possesses a significant attraction and is based on a small number of clear, intuitive foundations. The meaning of an algebraic concept can be of a number-theoretic or geometric nature, and frequently its roots lie in computational aspects of mathematics and in the solution of equations. The principles arising from such a historical understanding and the requirements needed in a modern university textbook in algebra remain generally accepted. The whole difficulty is in the realization of more or less known ideas. The natural evolution of the standard programs, both on behalf of unifying the courses in linear algebra and higher-dimensional analytic geometry, and on behalf of separating them and sprinkling elements of number theory into a course in algebra, are reflected in the pages of the present book, which has been based on the previously mentioned textbook of the same name, although considerably extended and divided into three parts for the convenience of readers. It is self-understood that the combination of these parts must certainly contain the stable core of these three courses, i.e., the minimum that every textbook should include.

In 1980 Kostrikin co-authored another famous textbook Linear algebra and geometry with Yuri Ivanovich Manin. This book contains the following chapters: In the 1950's, Kostrikin's research centred on the restricted Burnside problem for groups of prime exponent.

See History of the Burnside problem

He made a major breakthrough in 1952 by proving finiteness for the case of 2 generators with an exponent of 5. By 1958, he had developed and extended his 'sandwich' method so that he was able to prove the finiteness for any number of generators and any prime exponent. (In 1989, Zelmanov, using ideas of Kostrikin among others, solved the restricted Burnside problem for arbitrary exponent for which he later received a Fields medal.)

In the 1960's, Kostrikin studied infinite-dimensional Lie algebras of Cartan type for finite characteristic and, with Shafarevich, formulated a conjecture describing all simple Lie p-algebras for characteristic p > 5. This conjecture motivated research in the field for many years and was finally proved by R E Black and R L Wilson.

Two other problems to which Kostrikin contributed were [4]:-

... the classification of finite-dimensional non-associative algebras whose automorphism group acts transitively on all non-zero elements ...

... the calculation of the number of unitary conservative complex polynomials and the determination of an upper bound in terms of p for the nilpotence class of a Lie ring having a fixed-point free automorphism of prime order.

In the 1990's, Kostrikin discovered, with many young mathematicians, a theory of integral lattices in simple Lie algebras which are invariant under the Killing form. These had unexpectedly rich applications to other areas such as representations of certain finite simple groups. He published (jointly with P H Tiep) Orthogonal Decompositions and Integral Lattices in 1994. Rudolf Scharlau begins a review of the work as follows:-

The book deals with certain "concrete" aspects of the representation theory of finite (almost) simple groups, namely with the realization of certain classes of these groups as automorphism groups of integral lattices and of related algebraic and combinatorial objects (root systems, symplectic spreads). The lattices are of a particular kind, embedded into a simple Lie algebra over C and endowed with the Killing form. The book consists almost exclusively of results obtained during the past 15 years by a group of algebraists at Moscow University, which are presented here for the first time in book form.

Other websites about Aleksei Kostrikin: