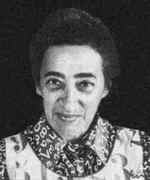 Olga Taussky-Todd's name before she married was Olga Taussky and she was born into a Jewish family. Her father, Julius David Taussky, was an industrial chemist who also wrote articles for a newspaper. Her mother, Ida Pollach, was never trained for anything other than being a housewife and looking after her children. Olga was the middle child of three girls, with three years separating her both from her older sister and from her younger sister. Of her parents she wrote [1]:-

My father was a very interesting man, very active, very creative. ... My mother was a country girl ... a rather quiet lady ... educated to be a housewife ...

When Olga was three years old the family moved to Vienna. There Olga attended primary school and although she did well, her older sister was the star pupil. Olga received the top or second top grade for arithmetic but her favourite subjects were essay writing and grammar. In addition to her schooling she had private music lessons. When World War I broke out conditions became very difficult indeed in Vienna, there was severe shortages of food and the family were near to starving.

In 1916 the Taussky family moved again, this time to Linz where Olga's father had a job as director of a vinegar factory which, in addition to vinegar made jams and soft drinks. Julius Taussky was well qualifed for the job for he had coauthored a text on vinegar with his own father Samuel Taussky in 1903. Arriving in Linz in the middle of World War I, life was still hard for them but food, although still scare, was slightly more plentiful than in Vienna. When she was 14 years old Olga entered the high school where she spent a year before studying at the Gymnasium. At this stage she was still interested in writing and poetry, and initially the Latin that she began to study at the Gymnasium fascinated her, particularly Latin grammar. Suddenly, however, her interests moved to mathematics [1]:-

While I tried to read any books that came my way, the realisation that the greatest wisdom was not to be gained by reading books struck me suddenly. I felt that scientific experiments provided almost unlimited insight ... Mathematics, too, came to me at that time as an experimental subject ... Gradually it became clear to me that [mathematics] was my subject.

From about the age of fifteen she tutored, starting by teaching chemistry to a classmate, but doing more and more over time. Olga's father died when she was in her final year at school so she increased her tutoring to try to help out the family finances. Knowing that it would be hard to fund her university studies she worked through the summer at the vinegar factory.

There was a lot of family pressure on Taussky to study chemistry, and indeed she loved the subject, so she entered the University of Vienna with a chemistry degree in mind, but her older sister qualified in chemistry and took over her father's work. The family pressure came off Taussky, and she was able to make mathematics her main subject.

At Vienna Olga was taught by Furtwängler, Hahn, Wirtinger, Menger, Helly and others, while she was a fellow student of Gödel. At that time, the most famous of these was Furtwängler but he was in poor health, only being able to walk with help and a student had to write for him when he lectured. Furtwängler became her thesis supervisor and after enjoying his course on number theory in her first year and his algebraic number theory seminar in her second year she asked him if she could write her thesis on number theory. He said that she would work on class field theory which, she wrote [1]:-

She wrote her thesis on algebraic number fields just as class field theory was being developed. However things were not easy [1]:-

... I had a very tough time as a thesis student, I had no colleagues whatsoever and hardly saw my teacher, who for quite a while did not direct me towards a specific problem.

She was awarded a doctorate in 1930 and her thesis was published in Crelle's Journal in 1932. After the award of her doctorate she earned some money by tutoring but also continued to work hard on her mathematics, continuing to develop the ideas from her thesis.

Encouraged to attend two meetings of the German Mathematical Society, she lectured there on her results and began a collaboration on group theory with A Scholzy, a student of Schur. At one of these meetings Hahn recommended her to Courant and, in 1931 she was appointed as assistant at Göttingen. Courant had been looking for someone to work with Wilhelm Magnus and Helmut Ulm editing the first volume of Hilbert's complete works on number theory and Taussky fitted the bill perfectly.

While in Göttingen Taussky also edited Artin's lectures in class field theory (1932), assisted Emmy Noether in her class field theory and Courant with his differential equations course. Leaving Göttingen in the summer of 1932, she received a letter from Courant before the new academic year started advising her not to return to Göttingen due to unrest at the university caused by the deteriotating political situation.

In 1932-1933 Taussky tutored in Vienna, then she spent a year at Bryn Mawr before taking up a research fellowship from Girton College, Cambridge in 1935. Hardy helped her obtain a teaching post in a London college in 1937 where she soon met an Irishman Jack (John Todd) who was teaching analysis at a different London College. They began working on mathematics together and were married on 29 September of the following year. Taussky said 50 years later [14]:-

My life and my career would have been so different if my Irishman had not come along.

During World War II Olga and Jack moved from place to place. They spent some time in Belfast with Jack's mother and some time in Oxford where Taussky-Todd's College had moved to avoid the London air raids. At this time Taussky-Todd wrote some papers on group theory, for example studying groups in which, in today's terminology, every subnormal subgroup is normal. She proved, among other things, that a group with cyclic Sylow subgroups satisfies this property. She also wrote several papers on matrices of finite order such at Matrices with finite period in 1940 and Matrices of finite period in the following year, both written jointly with her husband.

While teaching near Oxford she supervised Hanna Neumann's D.Phil. thesis on combinatorial group theory during 1942 and 1943. Given leave of absence from her College to undertake war work, Taussky-Todd worked at the National Physical Laboratory ay Teddington between 1943 and 1946. It was a useful experience for her mathematically [1]:-

The duties in my aerodynamics job were very heavy. ... For the first time I realised the beauty of research on differential equations - something that my former boss, Professor Courant, had not been able to instil in me. Secondly I learned a lot of matrix theory.

Just to illustrate this let us note that during this time Taussky-Todd wrote several papers which were published by the Ministry of Aircraft Production in London. For example she published in 1944 A note on skew-symmetric matrices in which she discussed the form of the matrices X′X and XX′, where X′ is the transpose of the matrix X whose columns are the eigenvectors of a skew-symmetric matrix with distinct eigenvalues. In the following year she published On some boundary value problems in the theory of the non-uniform supersonic motion of an aerofoil in which she gives rigorous proofs of methods to find the velocity potential due to a two-dimensional airfoil in a supersonic stream whose shape and motion are given. These papers she published under the name Olga Todd, while most of her other papers she wrote under the name Olga Taussky, with a few latter papers written under the name Olga Taussky-Todd.

In 1947 Olga and Jack when to the United States, with the original intention of spending a year there, and they worked at the National Bureau of Standards' National Applied Mathematics Laboratory after spending a while at the Institute for Advanced Study at Princeton working on von Neumann's computer project. She worked as a consultant in mathematics at the National Bureau of Standards and because of her work there with computers she has been described as a:-

... computer pioneer ... who provided significant contributions to solutions of problems associated with applications of computers.

She continued to write papers on matrix theory, group theory, algebraic number theory but she also wrote on numerical analysis.

... my job at the Bureau was not exactly right for me. It was certainly a very interesting job. I learned a lot there, contributed a lot, and was treated with great courtesy.

In 1957 Olga and Jack both accepted appointments at the California Institute of Technology. She wrote:-

After many years of work mostly with applied mathematics, I was in the beginning rather uncertain about the teaching. But again it was the students who came to my assistance [as in the college in London]. It was clear to them that I had much mathematics to give them and they forced it out of me.

In 1977 she retired becoming Professor Emeritus, but she continued to lead a very active mathematical life. Particularly she could devote even more time to the very large mathematical correspondence which she carried on with many throughout the world.

Olga's honours and work is described in [13] as follows:-

Olga Taussky-Todd was a distinguished and prolific mathematician who wrote about 300 papers. Throughout her life she received many honors and distinctions, most notably the Cross of Honor, the highest recognition of contributions given by her native Austria. Olga's best-known and most influential work was in the field of matrix theory, though she also made important contributions to number theory.

In [13] there are also a number of tributes from those she taught over the years. Rober Guralnick writes:-

I felt very fortunate to have this chance to work with someone who had such a command of the field.

Olga was a superb advisor, encouraging, cajoling, and always there to help.

But she was not without her idiosyncrasies as Charles Johnson writes:-

... she had rather particular ideas about mathematical writing. No pictures or diagrams were allowed, and, much as I wanted to write "n×n " to describe the dimensions of a matrix in my thesis, it had to be "n-by-n". I, and my students, still write "n-by-n".

Finally we should mention some of the many honours Taussky-Todd received for her mathematical contributions. She received the Ford Prize from the Mathematical Association of America in 1971 for a paper on the sums of squares. She was elected to several academies: elected to the Austrian Academy of Sciences (1975); elected to the Bavarian Academy of Sciences (1985); elected a Fellow of the American Association for the Advancement of Science (1991). She was honoured by the Austrian government in 1978 with their highest award, The Cross of Honour in Science and Arts, First Class and, in 1980, received an honorary doctorate from the University of Vienna. She also was awarded an honorary doctorate from the University of Southern California in 1988.

Let us finish by quoting her own words [1]:-

... from early childhood on, poetry and writing came to me in a natural way. But it seems to me that both in the work of others and in my own I look for beauty, and not only for achievement. ... a person who started with the enthusiasm that came to me and did not diminish through hardships, difficulties, and disappointments 'is not given a choice' and 'shadows of the future one does not see'.

Other pages about Olga Taussky-Todd:

Other websites about Olga Taussky-Todd: