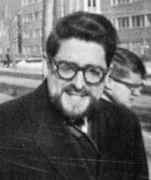 Louis Nirenberg's father was a teacher of Hebrew. Louis went to a Hebrew school but he did not want to learn Hebrew. His father tried to teach him but, meeting resistance, thought that a friend might have more success giving him private lessons. This friend loved mathematical puzzles and so most of the lessons were spent solving puzzles rather than learning Hebrew. Louis attended Baron Byng High School in Montreal where he had excellent teachers. At this stage, primarily because of an outstanding physics teacher, he thought he would like to become a physicist. After graduating from the school, he entered McGill University where he majored in both mathematics and physics. He graduated from McGill with a B.S. in 1945.

After he graduated Nirenberg thought that he would carry on to graduate studies in theoretical physics. However, after graduating he took a summer job at the National Research Council of Canada in Montreal. At that time their research was on the atomic bomb project and one of the scientists there was Ernst Courant, Richard Courant's eldest son. Ernst Courant had married a girl from Montreal who Nirenberg knew, so he asked her if, when she next visited him, she could ask Richard Courant for advice on the best place to study theoretical physics. The advice came back that Nirenberg should first do a Master's Degree in mathematics at New York University, and then go on to study physics. Nirenberg went for an interview with Courant and Friedrichs in New York and they offered him an assistantship.

After the award of a Master's Degree by New York University in 1947, Nirenberg remained there working for his doctorate. His official supervisor was Jim Stoker but he was greatly influenced by Kurt Friedrichs. He was awarded a Ph.D. in 1949 for his thesis The Determination of a Closed Convex Surface Having Given Line Elements. In this he examined a question first asked, and partially solved, by Hermann Weyl around 1916:

Given a Riemannian metric on the unit sphere, with positive Gauss curvature, can you embed this 2-sphere isometrically into 3-space as a convex surface?

He used ideas due to Charles Morrey in giving a positive answer to this question. He published the results of his thesis in 1953 in the paper The Weyl and Minkowski problems in differential geometry in the large. Also in 1953, the first year in which his publications appear, he published three further papers: A strong maximum principle for parabolic equations; A maximum principle for a class of hyperbolic equations and applications to equations of mixed elliptic-hyperbolic type; and On nonlinear elliptic partial differential equations and Hölder continuity.

After completing his doctorate in 1949, Nirenberg was appointed as a Research Assistant at New York University, becoming one of the early members of the Institute of Mathematical Sciences and Mechanics (it was renamed the Courant Institute in 1964). After being promoted from Research Assistant to Research Associate, he was made an Assistant Professor in 1951. He spent 1951-52 in Europe, visiting Zürich and Göttingen. In Zürich he attended a lecture course by Heinz Hopf on geometry, a course by Bartel van der Waerden on Riemann surface theory, and lectures by Rolf Nevanlinna and Wolfgang Pauli. He returned to New York and was promoted to Associate Professor before becoming a full professor at the Courant Institute in 1957. He was a Sloan Fellow during 1958-60, and a Guggenheim Fellow in 1966-67 and again in 1975-76.

We give an overview of Nirenberg's mathematical contributions by quoting from the citation for the Steele Prize for Lifetime Achievement which he received from the American Mathematical Society in 1994 [1]:-

Nirenberg is a master of the art and science of obtaining and applying a priori estimates in all fields of analysis. A minor such gem is the useful set of Garliardo-Nirenberg inequalities. A high point is his joint research with [Shmuel] Agmon and [Avron] Douglis on a priori estimates for general linear elliptic systems, one of the most widely quoted results in analysis. Another is his fundamental paper with Fritz John on functions of bounded mean oscillation which was crucial for the later work of [Charles] Fefferman on this function space. Nirenberg has been the centre of many major developments. His theorem with his student, Newlander, on almost complex structures has become a classic. In a paper building on earlier estimates of [Alberto] Calderón and [Antoni] Zygmund, he and [Joseph] Kohn introduced the notion of a pseudo-differential operator which helped to generate an enormous amount of later work. His research with [François] Trèves was an important contribution to the solvability of general linear PDEs. Some other highlights are his research on the regularity of free boundary problems with [David] Kinderlehrer and [Joel] Spuck, existence of smooth solutions of equations of Monge-Ampère type with [Luis] Caffarelli and Spuck, and singular sets for the Navier-Stokes equations with Caffarelli and [Robert] Kohn. His study of symmetric solutions of non-linear elliptic equations using moving plane methods with [Basilis] Gidas and [Wei Ming] Ni and later with [Henri] Berestycki, is an ingenious application of the maximum principle.

Inequalities, mentioned near the beginning of this quote, have a special part in Nirenberg's life. He is quoted as saying [5]:-

Friedrichs was a great lover of inequalities and that affected me very much. The point of view was that the inequalities are more interesting than the equalities.

I love inequalities. So if somebody shows me a new inequality, I say: "Oh, that's beautiful, let me think about it," and I may have some ideas connected to it.

The many publications by Nirenberg (MathSciNet lists 185) include only one book. This is Topics in non-linear functional analysis (1974) which is a record by Ralph A Artino of a lecture course given by Nirenberg at the Courant Institute in 1973-74 [2]:-

The lecture course was aimed at students with a good grounding in linear operators and some familiarity with differential geometry, but limited knowledge of topology. The first two chapters are devoted to topological degree approaches, first in finite-dimensional spaces and then in Banach space. The next chapter on bifurcation theory is followed by one co-written by J Ize, which introduces further topological methods such as cobordism and cohomotopy. Chapter five is devoted to a brief foray into the theory of monotone operators.

Jerrold Marsden begins a review of the book as follows:-

For students and researchers in nonlinear analysis this volume of lecture notes is the most useful introduction to the subject currently available. It is short, concise and to the point, and the proofs are unusually elegant, always with a geometric flavour and the best available. Much of the flavour of the notes centres on the use of degree theory. The introduction of the notion of degree and the development of its basic properties in the span of some fifty pages is a triumph in itself. This is used in Chapters III and IV in the discussion of bifurcation theory (the highlight being a complete proof of Rabinowitz' global bifurcation theorem) and the solution of nonlinear partial differential equations (the highlight being the global theorem of Landesman and Lazer).

The second quote related to an author's results he was describing [5]:-

The nonlinear character of the equations is used in an essential way, indeed he obtains results because of the nonlinearity not despite it.

Nirenberg has been awarded many prizes and given many honours in a distinguished career. He received the Bôcher Prize from the American Mathematical Society in 1959:-

... for his work in partial differential equations.

He was a plenary speaker at the International Congress of Mathematicians held in Stockholm in August 1962, giving the lecture Some Aspects of Linear and Nonlinear Partial Differential Equations. In this lecture he gave a survey of some recent developments in existence and regularity theory for nonlinear boundary value problems, especially elliptic problems. He was also a plenary speaker at the British Mathematical Colloquium in Aberdeen, Scotland, in 1983 when he gave the lecture Comments on non-linear problems.

Nirenberg has served the American Mathematical Society in several roles. He was a member of the Council during 1963-65, gave the American Mathematical Society Colloquium Lectures in 1974, and was Vice-President of the Society in 1976-77. The Crafoord Prize was awarded to Nirenberg at a ceremony at the Royal Swedish Academy of Sciences on Wednesday, 29 September 1982. He shared the Prize of 350000 Swedish crowns with Vladimir Igorevich Arnold for their achievements in the field of non-linear differential equations. They were the first mathematicians to receive the Crafoord Prize. The Press Release contains the following:-

Newton's ideas were used to describe many different systems in physics and in geometry, which may depend on several variables simultaneously. The equations are then called partial differential equations and again the most interesting ones are non-linear. Nirenberg has treated a great number of problems of this nature. As an example from geometry one can mention the problem to find a surface with given curvature and from physics studies of the equations for viscose fluids and concerning existence of free streamlines. Nirenberg's work ranges over a variety of problems and has been of basic importance for the development of the field.

He received the Jeffery-Williams Prize of the Canadian Mathematical Society in 1987. We have already mentioned above the Steele Prize for Lifetime Achievement which he received from the American Mathematical Society in 1994. Most recently, he received the National Medal of Science on 18 October 1995. At the time of this most prestigious award, David W McLaughlin, the director of the Courant Institute, said [3]:-

Nirenberg's influence is not limited to the many original and fundamental contributions he has made to the subject. He has not only played a major role in the development of mathematical analysis worldwide but has had significant influence on the development of young mathematicians, as indicated by his direction of over forty Ph.D. students. As a past director of Courant, he has demonstrated leadership and vision for the mathematical sciences community. The clarity of his writing, his lectures, and numerous expository articles continue to inspire generations of mathematicians.

The work of Louis Nirenberg has enormously influenced all areas of mathematics linked one way or another with partial differential equations: real and complex analysis, calculus of variations, differential geometry, continuum and fluid mechanics.

Caffarelli mentions Nirenberg's areas of interest in partial differential equations: Regularity and solvability of elliptic equations of order 2n; the Minkowski problem and fully nonlinear equations; the theory of higher regularity for free boundary problems; and symmetry properties of solutions to invariant equations.

Louis Nirenberg is recognized throughout the world for his many important research contributions to mathematics, his marvellous lectures, and his lucid expository writing. His range of interest is very broad: differential equations, harmonic analysis, differential geometry, functional analysis, complex analysis, etc. ... Nirenberg's career has been an inspiration; his numerous students, collaborators, and colleagues have learned a great deal from him. Aside from mathematics, Nirenberg has taught all of us the enjoyment of travel, movies, and gastronomy. An appreciation of Nirenberg also must include his ever-present sense of humour. His humour is irrepressible, so that on occasion it makes its way to the printed page.

Nirenberg and John Nash were awarded the Abel prize in 2015 for:

... striking and seminal contributions to the theory of nonlinear partial differential equations and its applications to geometric analysis.

Let us end with a quote from Nirenberg [4]:-

I wrote one paper with Philip Hartman that was elementary but enormous fun to do. That's the thing I try to get across to people who don't know anything about mathematics, what fun it is! One of the wonders of mathematics is you go somewhere in the world and you meet other mathematicians, and it's like one big family. This large family is a wonderful joy.

Other Mathematicians born in Canada
A Poster of Louis Nirenberg

Other websites about Louis Nirenberg: