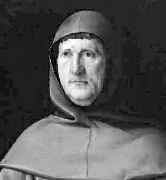 Luca Pacioli's father was Bartolomeo Pacioli, but Pacioli does not appear to have been brought up in his parents house. He lived as a child with the Befolci family in Sansepolcro which was the town of his birth. This town is very much in the centre of Italy about 60 km north of the city of Perugia. As far as Pacioli was concerned, perhaps the most important feature of this small commercial town was the fact that Piero della Francesca had a studio and workshop in there and della Francesca spent quite some time there despite frequent commissions in other towns

Although we know little of Pacioli's early life, the conjecture that he may have received at least a part of his education in the studio of della Francesca in Sansepolcro must at least have a strong chance of being correct. One reason that this seems likely to be true is the extensive knowledge that Pacioli had of the work of Piero della Francesca and Pacioli's writings were very strongly influenced by those of Piero.

Pacioli moved away from Sansepolcro while he was still a young lad. He moved to Venice to enter the service of the wealthy merchant Antonio Rompiasi whose house was in the highly desirable Giudecca district of that city. One has to assume that Pacioli was already well educated in basic mathematics from studies in Sansepolcro and he certainly must have been well educated generally to have been chosen as a tutor to Rompiasi's three sons. However, Pacioli took the opportunity to continue his mathematical studies at a higher level while in Venice, studying mathematics under Domenico Bragadino. During this time Pacioli gained experience both in teaching, from his role as tutor, and also in business from his role helping with Rompiasi's affairs.

It was during his time in Venice that Pacioli wrote his first work, a book on arithmetic which he dedicated to his employer's three sons. This was completed in 1470 probably in the year that Rompiasi died. Pacioli certainly seemed to know all the right people for he left Venice and travelled to Rome where he spent several months living in the house of Leone Battista Alberti who was secretary in the Papal Chancery. As well as being an excellent scholar and mathematician, Alberti was able to provide Pacioli with good religious connections. At this time Pacioli then studied theology and, at some time during the next few years, he became a friar in the Franciscan Order.

In 1477 Pacioli began a life of travelling, spending time at various universities teaching mathematics, particularly arithmetic. He taught at the University of Perugia from 1477 to 1480 and while there he wrote a second work on arithmetic designed for the classes that he was teaching. He taught at Zara (now called Zadar or Jadera in Croatia but at that time in the Venetian Empire) and there wrote a third book on arithmetic. None of the three arithmetic texts were published, and only the one written for the students in Perugia has survived. After Zara, Pacioli taught again at the University of Perugia, then at the University of Naples, then at the University of Rome. Certainly Pacioli become acquainted with the duke of Urbino at some time during this period. Pope Sixtus IV had made Federico da Montefeltro the duke of Urbino in 1474 and Pacioli seems to have spent some time as a tutor to Federico's son Guidobaldo who was to become the last ruling Montefeltro when his father died in 1482. The court at Urbino was a notable centre of culture and Pacioli must have had close contact with it over a number of years.

In 1489, after two years in Rome, Pacioli returned to his home town of Sansepolcro. Not all went smoothly for Pacioli in his home town, however. He had been granted some privileges by the Pope and there was a degree of jealousy among the men from the religious orders in Sansepolcro. In fact Pacioli was banned from teaching there in 1491 but the jealousy seemed to be mixed with a respect for his learning and scholarship for in 1493 he was invited to preach the Lent sermons.

During this time in Sansepolcro, Pacioli worked on one of his most famous books the Summa de arithmetica, geometria, proportioni et proportionalita Ⓣ which he dedicated to Guidobaldo, the duke of Urbino. Pacioli travelled to Venice in 1494 to publish the Summa Ⓣ. The work gives a summary of the mathematics known at that time although it shows little in the way of original ideas. The work studies arithmetic, algebra, geometry and trigonometry and, despite the lack of originality, was to provide a basis for the major progress in mathematics which took place in Europe shortly after this time. As stated in [1] the Summa Ⓣ was:-

... not addressed to a particular section of the community. An encyclopaedic work (600 pages of close print, in folio) written in Italian, it contains a general treatise on theoretical and practical arithmetic; the elements of algebra; a table of moneys, weights and measures used in the various Italian states; a treatise on double-entry bookkeeping; and a summary of Euclid's geometry. He admitted to having borrowed freely from Euclid, Boethius, Sacrobosco, Fibonacci, ...

The geometrical part of Pacioli's Summa Ⓣ is discussed in detail in [6]. The authors write:-

The geometrical part of L Pacioli's Summa [Venice, 1494] in Italian is one of the earliest printed mathematical books. Pacioli broadly used Euclid's Elements, retelling some parts of it. He referred also to Leonardo of Pisa (Fibonacci).

Another interesting aspect of the Summa Ⓣ was the fact that it studied games of chance. Pacioli studied the problem of points, see [9], although the solution he gave is incorrect.

Ludovico Sforza was the second son of Francesco Sforza, who had made himself duke of Milan. When Francesco died in 1466, Ludovico's elder brother Galeazzo Sforza became duke of Milan. However, Galeazzo was murdered in 1476 and his seven year old son became duke of Milan. Ludovico, after some political intrigue, became regent to the young man in 1480. With very generous patronage of artists and scholars, Ludovico Sforza set about making his court in Milan the finest in the whole of Europe. In 1482 Leonardo da Vinci entered Ludovico's service as a court painter and engineer. In 1494 Ludovico became the duke of Milan and, around 1496, Pacioli was invited by Ludovico to go to Milan to teach mathematics at Ludovico Sforza's court. This invitation may have been made at the prompting of Leonardo da Vinci who had an enthusiastic interest in mathematics.

At Milan Pacioli and Leonardo quickly became close friends. Mathematics and art were topics which they discussed at length, both gaining greatly from the other. At this time Pacioli began work on the second of his two famous works, Divina proportione Ⓣ and the figures for the text were drawn by Leonardo. Few mathematicians can have had a more talented illustrator for their book! The book which Pacioli worked on during 1497 would eventually form the first of three books which he published in 1509 under the title Divina proportione Ⓣ (see for example [3]). This was the first of the three books which finally made up this treatise, and it studied the 'Divine Proportion' or 'golden ratio' which is the ratio a:b=b:(a+b). It contains the theorems of Euclid which relate to this ratio, and it also studies regular and semiregular polygons (see in particular [4] for a discussion of Pacioli's work on regular polygons). Clearly the interest of Leonardo in this aesthetically satisfying ratio both from a mathematical and artistic point of view was an important influence on the work. The golden ratio was also of importance in architectural design and this topic was to form the second part of the treatise which Pacioli wrote later. The third book in the treatise was a translation into Italian of one of della Francesca's works.

Louis XII became king of France in 1498 and, being a descendant of the first duke of Milan, he claimed the duchy. Venice supported Louis against Milan and in 1499 the French armies entered Milan In the following year Ludovico Sforza was captured when he attempted to retake the city. Pacioli and Leonardo fled together in December 1499, three months after the French captured Milan. They stopped first at Mantua, where they were the guests of Marchioness Isabella d'Este, and then in March 1500 they continued to Venice. From Venice they returned to Florence, where Pacioli and Leonardo shared a house.

The University of Pisa had suffered a revolt in 1494 and had moved to Florence. Pacioli was appointed to teach geometry at the University of Pisa in Florence in 1500. He remained in Florence, teaching geometry at the university, until 1506. Leonardo, although spending ten months away working for Cesare Borgia, also remained in Florence until 1506. Pacioli, like Leonardo, had a spell away from Florence when he taught at the University of Bologna during 1501-02. During this time Pacioli worked with Scipione del Ferro and there has been much conjecture as to whether the two discussed the algebraic solution of cubic equations. Certainly Pacioli discussed this topic in the Summa Ⓣ and some time after Pacioli's visit to Bologna, del Ferro solved one of the two cases of this classic problem.

During his time in Florence Pacioli was involved with Church affairs as well as with mathematics. He was elected the superior of his Order in Romagna and then, in 1506, he entered the monastery of Santa Croce in Florence. After leaving Florence, Pacioli went to Venice where he was given the sole rights to publish his works there for the following fifteen years. In 1509 he published the three volume work Divina proportione Ⓣ and also a Latin translation of Euclid's Elements. The first printed edition of Euclid's Elements was the thirteenth century translation by Campanus which had been published in printed form in Venice in 1482. Pacioli's edition was based on that of Campanus but it contained much in the way of annotation by Pacioli himself.

In 1510 Pacioli returned to Perugia to lecture there again. He also lectured again in Rome in 1514 but by this time Pacioli was 70 years of age and nearing the end of his active life of scholarship and teaching. He returned to Sansepolcro where he died in 1517 leaving unpublished a major work De Viribus Quantitatis Ⓣ on recreational problems, geometrical problems and proverbs. This work makes frequent reference to Leonardo da Vinci who worked with him on the project, and many of the problems in this treatise are also in Leonardo's notebooks. Again it is a work for which Pacioli claimed no originality, describing it as a compendium.

Despite the lack of originality in Pacioli's work, his contributions to mathematics are important, particularly because of the influence which his book were to have over a long period. In [10] the importance of Pacioli's work is discussed, in particular his computation of approximate values of a square root (using a special case of Newton's method), his incorrect analysis of certain games of chance (similar to those studied by Pascal which gave rise to the theory of probability), his problems involving number theory (similar problems appeared in Bachet's compilation), and his collection of many magic squares.

In 1550 there appeared a biography of Piero della Francesca written by Giorgio Vasari. This biography accused Pacioli of plagiarism and claimed that he stole della Francesca's work on perspective, on arithmetic and on geometry. This is an unfair accusation, for although there is truth that Pacioli relied heavily on the work of others, and certainly on that of della Francesca in particular, he never attempted to claim the work as his own but acknowledged the sources which he used.

Other pages about Luca Pacioli:

Other websites about Luca Pacioli: