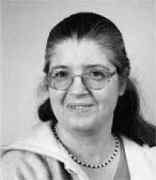 Bernadette Perrin-Riou was born in Les Vans, a small town about 75 km northwest of Avignon. Both Perrin-Riou's parents had been born in Les Vans but, her mother being a physicist and her father a chemist working in Paris, the family moved to Neuilly-sur-Seine, within the Paris area. It was in Neuilly-sur-Seine that Bernadette and her two sisters were brought up. The family provided a highly academic environment in which all three girls quickly developed a love of science. Bernadette's two sisters became physicists, but she was turned on to mathematics by an inspiring teacher, Pascal Monsellier, when she was studying at the Lycée. From that time on, in addition to outstanding performances in all her high school subjects, she discovered the fascination of mathematics.

Her class was very small, consisting of only twenty other women with whom she took all her classes. The small-scale, personal atmosphere was well suited to Perrin-Riou, and she found that she liked to delve deeply into subjects.

Perrin-Riou completed her undergraduate studies in 1977 and began to undertake research. She was appointed as a research assistant at Pierre et Marie Curie University in Paris in 1978 she worked towards her Thèse de 3ème cycle, advised by Georges Poitou. After the award of the degree from Université Paris-Sud XI in Orsay in 1979 she continued to work towards a doctorate supervised by John Coates who had been appointed to a professorship there in 1978. During the period that she worked towards her doctorate she published several important works beginning with Plongements d'extensions galoisiennes Ⓣ (1978). In 1979 she published the 110-page Plongement d'une extension diédrale dans une extension diédrale ou quaternionienne Ⓣ in the Mathematical Publications of Orsay Series. Jack Sonn writes:-

This work is devoted to a study of the embedding problem over number fields involving dihedral and quaternion Galois groups, which are distinguished by their violation of the Hasse local-global principle.

In 1983, following the award of her doctorate, Perrin-Riou was appointed Maître de Conférences at the Pierre et Marie Curie University. In the autumn of that year she accepted an invitation to spend a year as a visiting professor at Harvard University [2]:-

She had never been to the United States and was quite excited about the opportunity to exchange ideas with a new community of mathematicians. Although she enjoyed the intellectual interchange at Harvard, she found that splitting her time between work and family was difficult. Her husband, also a mathematician, and her 18-month-old son accompanied her on this trip, and the demands of family life left little time to socialise. The constant need to speak and work in English caused further stress. At the end of the year she was happy to return to France, continuing her research at the Pierre and Marie Curie University.

In 1985 Perrin-Riou's second child was born, another son. She began teaching at Université Paris VI and two years later her third son was born. She continued teaching and undertaking research, publishing papers such as p-adic L-functions associated to a modular form and an imaginary quadratic field (1988), (with John Coates) On p-adic L-functions attached to motives over Q (1989), Variation of the p-adic L-function under isogeny Ⓣ (1989), and Théorie d'Iwasawa et hauteurs p-adiques Ⓣ (1992). She published a fundamental paper in 1994, namely Théorie d'Iwasawa des représentations p-adiques sur un corps local Ⓣ in which she built an Iwasawa theory for crystalline p-adic representations generalizing those well known for Zp​(1) and the Tate module of an ordinary good reduction elliptic curve.

The same year in which this fundamental 80-page paper was published, she moved to Université Paris-Sud Orsay [2]:-

Although Perrin-Riou enjoyed her teaching experience, it was very time consuming and made it difficult to continue her mathematical research, which she did remarkably well nonetheless. In 1994 she obtained her present position at the University of Paris-Sud in Orsay. This position is almost exclusively a research position. Although she still teaches an occasional course and like the contact with students, she is freed from the constant time demands of teaching.

At the International Congress of Mathematicians at Zürich in 1994, Perrin-Riou gave the invited address p-adic L-functions. In the following year she published the important monograph Fonctions L p-adiques des représentations p-adiques Ⓣ. She wrote in the Preface:-

This book reflects research done over the past few years at the University of Pierre and Marie Curie.

In 2000 an English translation was published. The publisher describes the work as follows:-

The work described in this text led to Perrin-Riou being awarded several major prizes. In 1998 she was awarded the Charles-Louis de Saulses de Freycinet Prize from the Académie des Sciences. Then in 1999 she received the Ruth Lyttle Satter Prize from the American Mathematical Society, the fifth time the prize had been awarded. The citation for the award reads [1];-

The 1999 Satter Prize is awarded to Bernadette Perrin-Riou in recognition of her number theoretical research on p-adic L-functions and Iwasawa theory. Her results on the p-adic Gross-Zagier Formula and the related Birch and Swinnerton-Dyer Conjectures have striking applications to the arithmetic of elliptic curves. Moreover, her foundational papers on p-adic representations and motives and on the Bloch-Kato Conjectures provide a framework and route to these basic general problems about L-functions of motives. In particular, her work provides the link between Kato's Euler System and p-adic L-functions. Her works have had a profound impact on the study of p-adic L-functions and Iwasawa theory, both in shaping it at present and in determining the direction in which it is moving.

I am very grateful to the American Mathematical Society for awarding me the 1999 American Mathematical Society Ruth Lyttle Satter Prize, and I am both very happy and honoured. On this occasion I cannot help but think of some of the people who taught me mathematics: Pascal Monsellier, my high school teacher, with whom I discovered vector spaces, abstract algebraic structures, concrete plane and space isometry groups, as well as the epsilons and etas; and later Roger Godement and his course "Le jardin des délices modulaires" Ⓣ . George Poitou and John Coates then introduced me to number theory, Galois cohomology, and elliptic curves. Eventually, I tried to extend the framework of elliptic curves using p-adic representations, which naturally led me to use Jean-Marc Fontaine's ring of periods. I was not aware that my work has had the influence stated in the citation, but I certainly had great pleasure in discovering and understanding mathematical objects and becoming "intimate" with them. On the other hand, sometimes I found it was rather frustrating not to be able to share this mathematics with more people. This may be because of the subject; not everyone in number theory can prove a theorem at the same time deep and easy to state! Since this is a prize for women, I should probably add a few words without any claim to generality. My parents both had a scientific education, and I never thought of any other studies. I never felt a serious difference with men during my professional career, but this may be just because I was too innocent and unaware of the problem. However, I am still shocked by the small number of girls - about one-third - in my son's high school science class.

In 2001 Perrin-Riou published another major text Théorie d'Iwasawa des Representations p-adiques Semi-Stables Ⓣ. This monograph continues the work of her fundamental 1994 paper referred to above and provides a generalisation of that work to semi-stable p-adic representations.
Other Mathematicians born in France

Other websites about Bernadette Perrin-Riou: