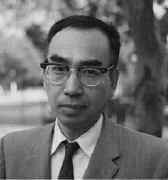 Tosio Kato studied physics at the University of Tokyo and graduated with a B.S. in 1941. However, World War II completely disrupted his studies at this point. He wrote in [4]:-

During World War II, I was working in the countryside of Japan.

This innocent little comment in fact hides a period of great difficulty and suffering for Kato. Barry Simon writes in [3]:-

... it is clear that his experiences while evacuated to the countryside and in the chaos immediately after the war were horrific. He barely escaped death several times and he caught tuberculosis.

Once circumstances allowed, he returned to the University of Tokyo to undertake doctoral studies. He was awarded his doctorate in physics in 1951 for a thesis entitled On the convergence of the perturbation method. However he had published many papers by the time the doctorate was awarded including work on pair creation by gamma rays, the motion of an object through a fluid and results on the spectral theory of operators arising in quantum mechanics. On the convergence of the perturbation method. I and On the upper and lower bounds of eigenvalues appeared in 1949, Variational methods in collision problems and On the convergence of the perturbation method. II in 1950, and Note on Schwinger's variational method, On the existence of solutions of the helium wave equation, Upper and lower bounds of scattering phases and Fundamental properties of Hamiltonian operators of Schrödinger type in 1951.

All of these papers appeared in physics journals except the last which appeared in the Transactions of the American Mathematical Society. In fact this last paper contains one of Kato's most important results, namely the self-adjointness of Hamiltonians of Schrödinger type. He originally submitted the paper to the Physical review but that journal [3]:-

... could not figure out how and who should referee it, and that journal eventually transferred it to the Transactions of the American Mathematical Society. Along the way the paper was lost several times, but it finally reached von Neumann, who recommended its acceptance. The refereeing process took over three years.

After Kato was awarded his doctorate he was appointed as assistant professor of physics at the University of Tokyo in 1951. In [3] S T Kuroda describes a course on mathematical physics which Kato taught during session 1953-54, and which Kuroda attended:-

The course covered, thoroughly but efficiently, most of the standard material from the theory of functions through partial differential equations. The style of his lecture never gave an impression that he went quickly, but at the end of each class I was surprised by how much he had covered within one session. The course could live vividly today ...

In 1954-55 Kato visited the United States for the first time, spending time at the University of California at Berkeley, and at New York University. The Department of Mathematics of the University of California, Berkeley, published Kato's notes Quadratic forms in Hilbert spaces and asymptotic perturbation series in 1955. Also, resulting from his visit to New York University, Kato's notes On the eigenfunctions of many-particle systems in quantum mechanics were published by the Mathematical Sciences research Institute of New York University in 1956. These notes extend results which were published in Kato's famous 1951 Transactions of the American Mathematical Society paper mentioned above. Although still based in Japan, Kato made many visits to the United States during the following years, visiting the National Bureau of Standards in 1955-56, and the University of California at Berkeley and the California Institute of technology in 1957-58.

In 1957 Kato published A treatise on function spaces in Japanese which:-

... emphasizes clear and simple explanations of the fundamental notions of functional analysis.

He was appointed Professor of Physics at the University of Tokyo in 1958 and led a small research group in the physics department, while his colleague Kosaku Yosida was building a group within mathematics studying related topics. František Wolf at Berkeley had become interested in perturbation theory through Kato's work and played a major role in an effort which brought Kato to Berkeley in 1962 to become Professor of Mathematics. In fact Kato had major difficulties in obtaining a visa for the United States because of the tuberculosis he had suffered. It was the mathematician Charles Dolph who contacted the physicist Otto Laporte who was the American attaché in Tokyo and he arranged for a waiver to be applied.

In 1966 Kato published his classic text Perturbation theory for linear operators which was [3]:-

... used as a bible by a generation of mathematical physicists and operator theorists.

This is a treatise on linear transformations in Hilbert space as seen from the point of view of perturbation theory, as opposed to commutator theory or invariant subspaces. Transformations in Banach spaces are also considered when they can be treated as generalizations of self-adjoint transformations. The tone of the book is set in the first two chapters, which are concerned with transformations in finite-dimensional spaces and can be read with no prior knowledge of operator theory.

A Russian translation appeared in 1972 and a second English edition in 1976. In 1982 Kato published A short introduction to perturbation theory for linear operators which, in his own words from the Introduction:-

Let us mention a few more from Kato's great wealth of results. In 1962 he introduced new powerful techniques for studying the partial differential equations of incompressible fluid mechanics, the Navier-Stokes equations. He published On the Navier-Stokes initial value problem in 1962 in which he gave a careful and readable account of the initial-value problem for the Navier-Stokes system. In 1983 he discovered the "Kato smoothing" effect while studying the initial-value problem associated with the Korteweg-de Vries equation, which was originally introduced to model the propagation of shallow water waves. Another contribution to this area was On the Korteweg-de Vries equation where, in Kato's words from the paper:-

Existence, uniqueness, and continuous dependence on the initial data are proved for the local (in time) solution of the (generalized) Korteweg-de Vries equation on the real line ...

Kato retired from his chair at Berkeley in 1988 but remained extremely active in research. Heinz Cordes writes [3]:-

In 1996 Kato's wife Mizue became ill. After a while they moved into a retirement home in Oakland, and things stabilized to a point that he could start to work again.

I last saw Kato in the spring of 1999. He was emptying his house at Berkeley and asked me to help him get rid of some publications and books. It was a hard and sad time for him. However, Kato was willing to talk mathematics. His enthusiasm for it was intact. he was full of ideas and questions.

He died suddenly of heart failure.

Kato was an intensely private person who was deeply interested in nature and as a result he especially loved the Botanical Gardens at Berkeley, and he spent many happy hours there. Arne Jensen writes [3]:-

We often took walks in Tilden Park or Strawberry Canyon. It was during these walks that I learnt of his interest in botany. He could identify a large number of plants and trees and knew the Latin names as well He had a great respect for the classification system introduced in the eighteenth century by the Swedish botanist Carl von Linné.

He received many honours for his contributions, perhaps the most prestigious of which was the Norbert Wiener Prize in Applied Mathematics in 1980, from the American Mathematical Society and the Society for Industrial and Applied Mathematics. The paper [4] contains his acceptance speech for this prize. He was invited to give the Fermi Lectures at the Scuola Normale Superiore in Pisa in May 1985. He lectured on Abstract differential equations and nonlinear mixed problems.
Other Mathematicians born in Japan
A Poster of Tosio Kato

Other websites about Tosio Kato: