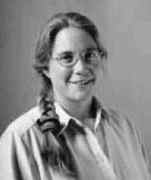 Karen Smith's love of mathematics began at a young age as she recalled [5]:-

One cool thing I remember was learning how to "cast out nines" to check my multi-digit multiplication in elementary school. ... This trick intrigued me already in elementary school, but later in middle school, when we learned about arithmetic in bases other than the standard base 10, I tried to apply this trick to check my work in base 8, and realized it no longer worked. I was very excited to realize that in base 8, one needs to cast out sevens instead! Finally, in high school, when I learned a little modular arithmetic ..., I was thrilled when I finally figured out the complete generalization to any base, including a formal proof. I finally fully understood something that has intrigued me for years! A great feeling.

At high school she studied the usual mathematical topics to prepare her for university entrance, namely geometry, algebra, pre-calculus, and then Calculus (AB). However, as happens so often, it was a teacher who went beyond the standard material who made all the difference [5]:-

I was lucky my high school teacher, Mr Drinfeld, was willing to run an extra class for a few top seniors. One of the books we read was Underwood Dudley's 'Elementary Number theory'. I loved it! It definitely made me a mathematician.

It was at high school that her interest in geometry began to blossom, an interest which would develop as her studies progressed [5]:-

In high school, I essentially discovered for myself the projective plane, a two-dimensional geometry not unlike the geometry one studies in high school but in which parallel lines meet "at infinity". At the time, I felt certain that one could develop an axiomatic system like we were doing for the traditional Euclidean plane in class, but I was unable to convince my teacher.

She entered Princeton University and in her first year took a calculus class with Charles Fefferman. It was Fefferman who first suggested to Smith that she might make mathematics her career. Before this, although she had shown herself to be an excellent mathematician and loved the subject, having a career as a mathematician had never occurred to her. She graduated from Princeton University in 1987 having majored in mathematics and she was awarded a teaching certificate which allowed her to teach mathematics at high schools in New Jersey. During 1987-88, Smith taught mathematics in a High School but looked into the possibilities of undertaking research [1]:-

She looked into the possibilities of graduate school and learned that one could actually get full support to work on a Ph.D. At this point, she decided to make a big change, and went off to the midwest for graduate school.

She entered the University of Michigan, Ann Arbor, in the autumn of 1988 to begin graduate studies. Also arriving at Ann Arbor at the same time was Juha Heinonen, a Finnish mathematician who had been appointed to a three-year postdoctoral Assistant Professorship - they married in 1991. At Ann Arbor Smith undertook research advised by Mel Hochster. After being awarded the Ruth Lyttle Satter Prize in 2001, she spoke of Hochster's influence on her [1]:-

Mel Hochster first introduced me to tight closure and encouraged me ... In fact, Mel Hochster has encouraged many women in mathematics to succeed at the very highest level and has supervised many female graduate students and postdocs who have gone on to become highly visible researchers in commutative algebra.

Smith was awarded a Ph.D. by the University of Michigan in 1993 after submitting her thesis Tight Closure of Parameter Ideals and F-Rationality. She was then awarded a National Science Foundation postdoctoral fellowship which funded her studies with Craig Huneke at Purdue University during 1993-94. Then she was appointed as a Moore Instructor at the Massachusetts Institute of Technology, taking up the position in the autumn of 1994. Her husband, Juha Heinonen, was promoted to Associate Professor at Michigan in 1994 and in that year Smith, accompanied by her husband, went to Boston so that she could fill the Moore Instructorship; they remained there for three years. Smith had been promoted to Associate Professor at MIT before both she and her husband both returned to the University of Michigan in 1997. She continues to work at the University of Michigan where, at present (2010), she is Keeler Professor.

In her Research Statement, Smith gives details of her research in technical terms. We give the opening sentences of her statement which gives an overview of the areas in which she works in non-technical terms [3]:-

Her deep contributions led to her being awarded the Ruth Lyttle Satter Prize by the American Mathematical Society at the 107th Annual Meeting of the Society in January 2001 in New Orleans. The citation for the award reads [1]:-

The Ruth Lyttle Satter Prize in Mathematics is awarded to Karen E Smith of the University of Michigan for her outstanding work in commutative algebra, which has established her as a world leader in the study of tight closure, an important tool in the subject introduced by Hochster and Huneke. It is also awarded for her more recent work which builds new bridges between commutative algebra and algebraic geometry via the concept of tight closure. In particular, the prize is awarded for her papers (1) "Tight closure of parameter ideals", Invent. Math. 115 (1994), 41-60; (2) "F-rational rings have rational singularities", Amer. J. Math. 119 (1997), 159-180; and (3) (with Gennady Lyubeznik) "Weak and strong F-regularity are equivalent in graded rings", Amer. J. Math. 121 (1999), 1279-1290.

She also received a CAREER Award by the National Science Foundation in 1996. The awards are designed to encourage scientists and engineers to integrate their research and education efforts earlier in their careers. She received the award for her proposal "Interactions of commutative algebras with analysis, geometry and computer science." Here are some extracts from the abstract of her proposal:-

The Career Development Plan combines a research program in commutative algebra with an educational program for graduate and undergraduate students at the University of Michigan. Most of the proposed research is part of a broader program to illuminate the connections between analytic ideas such as differential operators and L2-estimates with characteristic p techniques in commutative algebra such as tight closure. .... The proposed project is a greatly expanded version of research already in progress on sparse systems of parameters and Noether Complexity. This long term research and educational project includes plans for a new graduate course at the University of Michigan stressing the use of computers in algebraic geometry, and for a junior level seminar for majors in mathematics and computer science in which teams of undergraduate students led by a graduate student learn projective geometry through self-discovery. The research begun in this seminar will be expanded to a full-scale research project on computer algebra. This project will culminate in a conference in which students present their findings to a broader audience. ... A program to bring real-life practitioners of mathematics in business and industry to the undergraduate classroom is proposed. The objectives are to simultaneously motivate the curriculum and introduce students to people like themselves who have used mathematics to create a successful career.

She has received a number of other major awards from the National Science Foundation including Prime Characteristic Techniques in Commutative Algebra and Algebraic Geometry in 2000, and Enhancing the Research Workforce in Algebraic Geometry and its Boundaries in the Twenty-First Century (2005). This last mentioned major grant:-

In January 1996 Smith delivered a twenty-hour lecture series at the University of Jyväskylä, the university where her husband had studied before going to the United States. The course was aimed at introducing algebraic geometry to graduate students and mathematicians with little training in the topic. In collaboration with Lauri Kahanpää, Pekka Kekäläinen, and William Traves, Smith wrote up the lectures and published them as the book An invitation to algebraic geometry (2000). Gary Kennedy begins a review as follows:-

This aptly-named volume could also be compared to a tourist guide: portable and invitingly illustrated, it points out the major landmarks, gives some sense of history, and suggests where one might go to learn more or even perhaps to stay and work in the area.

Mark Green writes in the review [2]:-

The book under review provides an entryway for those who would like to become more familiar with algebraic geometry, while it entertains the hope, justifiable in this case, that some of its readers will fall under the sway of this beautiful subject. Karen Smith, a highly accomplished young commutative algebraist, was led by the momentum of her work and its results to apply her techniques to problems in algebraic geometry. ... This book has a great deal to recommend it ... Overall, readers will find this book easy to get into and enjoyable to read. Outsiders to the subject will feel that they are hiking up a gently sloping trail, at the end of which they reach a number of pleasant viewing spots from which they. can see rather far in a number of different directions. Students contemplating algebraic geometry as a field of specialization will also find this an attractive and instructive place to start.

The book was reprinted in 2004, the same year as a second book by Smith was published. This is Rational and Nearly Rational Varieties written jointly with János Kollár and Alessio Corti. The published, Cambridge University Press, writes:-

The most basic algebraic varieties are the projective spaces, and rational varieties are their closest relatives. In many applications where algebraic varieties appear in mathematics and the sciences, we see rational ones emerging as the most interesting examples. The authors have given an elementary treatment of rationality questions using a mix of classical and modern methods. Arising from a summer school course taught by János Kollár, this book develops the modern theory of rational and nearly rational varieties at a level that will particularly suit graduate students.

In a review in Zentralblatt, the book is described as:-

... a beautiful and ample introduction to the interesting topic of rational and 'nearly rational' varieties and it will be a valuable reference for a wide audience.

Smith's husband Juha Heinonen died in 2007. In a letter written in the summer of 2008 she describes her family:-

We are mother: Karen Smith, big sister: Sanelma Heinonen, age 10, and twins: Tapio and Helena, who will be five in August. Our family dad Juha Heinonen, who we called Isi, died in October 2007 after a brief but courageous battle with kidney cancer. We miss him very much, but we are slowly adjusting to going on with life the way we know he would have wanted. ... We live in a beautiful old house built in 1910 in Ann Arbor, Michigan, less than a kilometre from downtown. ... Our family is multicultural: Juha was from Finland and our kids are all fluent in Finnish. We go to Finland every summer, have a sauna, and bake traditional Finnish ruis leipaa every week. But of course we live in America, and Karen is 100% American ... .

Other websites about Karen Smith: