Born
December 1868
Broughshane, Co. Antrim, Ireland
Died
6 September 1949
Edinburgh, Scotland
Summary
James McBride studied at Queen's College Belfast and then taught at various Glasgow schools finishing as Rector of Queen's Park School. He published a number of papers in Geometry and was a founder member of the Euclidean Club. 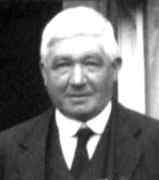 In 1896 McBride had been appointed as Mathematics Master at Allan Glen's School in Glasgow. He held this position until 1919 when he was appointed Headmaster of North Kelvinside Higher Grade School in Oxford Drive, Glasgow. He spent six years in this position before moving to Queen's Park School, Glasgow, where he was rector from 1925 to 1929 when he retired at the age of sixty.

McBride was a Founding Member of Euclidian Society in 1926, being elected as its president in 1930 and continuing in this role until he was made Honorary Vice-President in 1947. He was also a member of the Edinburgh Mathematical Society, being proposed for membership at the meeting on 9 December 1904 and, following the standard procedure, he became a member at the following meeting on 13 January 1905. He gave a paper at the first meeting of the Society's 1905-06 session on 10 November 1905 in Edinburgh, the title being A trigonometric dial: a teaching appliance. In session 1907-08 he gave the paper School apparatus for determining g; this was at a meeting of the Society on 13 March 1908 at the Technical College in Glasgow. He served on the Committee of the Edinburgh Mathematical Society from 1908 for five years until 1913. In 1909 he published Two illustrations of Newton's Third Law in the Edinburgh Mathematical Society's Edinburgh Mathematical Notes. This paper describes two experiments suitable for pupils to perform in a physics class at school. The first is a static experiment and the second a dynamic one. The dynamic one gives an experimental solution to, what McBride calls the 'Climbing Monkey Problem' [3]:-

A monkey (weight 30 lbs) tries to climb a rope which passes over a pulley and carries a weight of 30 lbs at the other end. Describe the motion.

The opinions of a class of 40 boys will generally be equally divided in favour of five or six different solutions, all wrong but one.

In 1913, McBride attended the Mathematical Colloquium which was held in the Mathematical Department of Edinburgh University during the week beginning Monday 4 August 1913. Unfortunately no record exists of all the participants in the 1914 Mathematical Colloquium also held in Edinburgh. After World War I, the Colloquium did not restart until 1926 and from then on it was held in St Andrews and was known as the St Andrews Colloquium. McBride is not in the 1926 photograph, but he did attend the 1930 Colloquium, the 1934 Colloquium and the 1938 Colloquium. No Colloquiums were held during World War II and by the time it restarted in 1951, McBride had died. He was elected a fellow of the Royal Society of Edinburgh on 8 March 1926, his proposers being Dugald Black McQuistan, Thomas Murray MacRobert, Sir Edmund T Whittaker, and W King Gillies.

An obituary, written by R A Robb, appears in the Royal Society of Edinburgh Year Book of 1950, page 27. We give a version of this obituary at THIS LINK.

In this obituary, Robb gives a description of McBride's character [4]:-

McBride was a brilliant and stimulating teacher, and those who knew him intimately recall with pleasure his unfailing kindness, courtesy and genial wit which bound to him a wide circle of friends. He loved mountaineering and motoring.

From 1938 McBride gave his address as the Scottish Liberal Club, 109 Princes Street, Edinburgh. In the 1940s he also gave the address Serpentine Avenue, Ballsbridge, Dublin. We have been unable to find a record of McBride's death in either Scotland or in Ireland, although its date is certain.

We mentioned above that McBride was a founding member of the Euclidean Society which had the aim to:-

... stimulate interest in the teaching of mathematics, with particular reference to logical order as found in the geometry of Euclid.

McBride's interest in Euclidian geometry is well illustrated by his paper The equal internal bisectors theorem, 1840-1940. ... Many solutions or none? A centenary account published in the Edinburgh Mathematical Notes in January 1943. This paper studies the history of a particular geometrical problem, namely the equal internal bisectors theorem. McBride begins his paper by writing:-

This paper contains (i) a short history of the geometrical theorem proposed in 1840 by Professor Daniel Christian Ludolph Lehmus (1780-1863) of Berlin to Jacob Steiner - "If BJY, CJZ are equal bisectors of the base angles of a triangle ABC, then AB equals AC," (ii) a selection of some half-dozen solutions from the 50 or 60 that have been given, (iii) some discussion of the logical points raised, and (iv) a list of references to the extensive literature of the subject. Incidentally two widely current legends will be cleared up, (i) that J J Sylvester in 1852 proved that a solution was impossible, (ii) that nevertheless a valid proof, the first, was given in 1874 by a Girl of the Golden West, a contemporary of Bret Harte and Mark Twain. Both these stories are "much exaggerated."

We give further extracts from this paper, in particular we have extracted the historical comments, at THIS LINK.
Other Mathematicians born in Ireland
A Poster of James McBride

Other pages about James McBride: