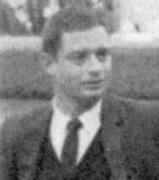 Phillip Griffiths's parents were Philip Griffiths and Jeanette Field. Phillip was an undergraduate at Wake Forest College in Winston-Salem, North Carolina. Originally established in Wake Forest in 1834 by the Baptist State Convention, the College moved to Winston-Salem in 1956, but it only became a university in 1967. Griffiths married Ann Lane Crittenden in 1958 while he was still an undergraduate; they had two children Jan Kirsten and David. He graduated with a B.S. in 1959 having been one of the first students at the Winston-Salem campus. After graduating from Wake Forest he went to Princeton University to undertake research.

In [6] Griffiths describes his time as a research student in Princeton:-

I entered Princeton University as a graduate student in 1959, when the Department of Mathematics was housed in the old Fine Hall. This legendary facility was marvellous in stimulating interaction among the graduate students and between the graduate students and the faculty. The faculty offered few formal courses, and essentially none of them were at the beginning graduate level. Instead the students were expected to learn the necessary background material by reading books and papers and by organising seminars among themselves. It was a stimulating environment but not an easy one for a student like me, who had come with only a spotty background. Fortunately I had an excellent group of classmates, and in retrospect I think the "Princeton method" of that period was quite effective.

... was wonderfully supportive and enthusiastic and his guidance made an enormous impact on my mathematical career. I remember well that a couple of mornings a week I would go to his office to present material to him. In those sessions I learned, among other things, Lie groups, sheaf cohomology, complex manifolds and differential geometry (the equivalence of the then-existing seven definitions of a connection).

Griffiths was advised to read certain texts and papers which were to have a huge impact on the direction his mathematical research would take. Perhaps most important of all was Weyl's Die Idee der Riemannschen Fläche but also highly significant were the papers of Élie Cartan, Hirzebruch's book Neue topologische Methoden in der algebraischen Geometrie, notes on complex manifolds by S-S Chern, and André Weil's Introduction à l'étude des variétés Kählériennes. Griffiths submitted his thesis On Certain Homogeneous Complex Manifolds to Princeton University in 1962 and was awarded his Ph.D.

Before completing his thesis, Griffiths had spent the summer of 1961 in Berkeley working with Chern:-

This turned out to be the beginning of a personal and professional relationship that has lasted for more than forty years.

After the award of his doctorate, Griffiths returned to Berkeley where he was Miller fellow at the University of California during the two years 1962-64. In 1964 he became a faculty member at Berkeley and he held this position until 1967. In this year his marriage to Ann ended. After spending the year 1967-68 as a visiting professor at Princeton University, he was appointed professor at Princeton in 1968. In 1968 he married Marian Folsom Jones; they had two children Sarah and Rebecca. In 1972 he left Princeton when he was appointed professor at Harvard University. He held this post until 1983 having spent the year 1975-76 at the University of California at Berkeley. He was named Dwight Parker Robinson Professor of Mathematics at Harvard University in 1983 but in that year was named Provost and James B Duke Professor of Mathematics at Duke University. After nine years holding this chair, Griffiths was appointed as Director of the Institute for Advanced Study at Princeton. He stepped down from this prestigious position at the end of the 2003-03 academic year becoming professor of Mathematics at the Institute for Advanced Study.

The four volumes [1] on analytic geometry, [2] on algebraic geometry, [3] on variations of Hodge structures, and [4] on differential systems total 2600 pages yet present only a selection of Griffiths' work (many of his papers and all eleven of his books are omitted). A reviewer of these volumes give a good overview:-

Though the papers selected cover a broad range of topics in complex analysis, algebraic geometry and differential equations ... there are a couple of fundamental threads running through things, over and above the stylistic and methodological outlook. Many of the papers return to the idea of examining geometric behaviour infinitesimally, in families of one sort or another, and trying to integrate the local results out to obtain global results, with varying degrees of success, of course. Some of the author's most enduring results come from simple such calculations which show how different higher-dimensional variations of cycles or Hodge structures are, often referred to as Griffiths transversality. This implies in various guises that, e.g., numerical equivalence and algebraic equivalence of cycles on projective varieties are different, that not every Hodge structure can be realized geometrically, and in a way, his proof with Clemens of the irrationality of the quartic threefold is at bottom a phenomenon of this sort. This sort of observation leads directly into the use of the exterior differential systems of Élie Cartan to try to find the "geometric core", e.g., of the moduli space of Hodge structures, which led to a great deal of the author's work in the early 1980s, and which spun off into the examination of PDE invariants via the exterior differential systems in the 1990s.

Here are some comments by a reviewer which illustrate well Griffiths' style and approach to mathematics:-

Certainly to a greater degree than other mathematicians of his standing, he has often opted for writing in a way that was expository, sometimes for his audience, but sometimes even for himself .... He writes ... of his conviction that one could learn as much or more from a clear proof or calculation in an insightful example or a meaningful case, as from a proof of the most general case one is capable of proving. ... At times [Griffiths] refers to the style of a paper as an "essay", allowing for a more discursive treatment of his subject. He even refers to the 1976 paper "Variations on a theme of Abel" as "the mathematical analogue of a historical novel"!

This book is a model of serious expository writing. ... Results are sometimes stated under mildly restrictive hypotheses in order to have clean statements, and technical details are often omitted. This makes for a crisp, attractive presentation.

Phillip has been an exceptionally effective Director of the Institute since 1991, and he will be greatly missed. We all have enormous respect for him personally and for his accomplishments. His tenure has been marked both by his ability to guide this institution in productive and exciting new directions, and his ability to further strengthen the unique opportunities the Institute offers to scholars from all over the world. ... Griffiths served as a key figure in the creation in 1998 of the Millennium Science Initiative [which] works to strengthen the science and technology capacity of developing nations through integrated projects of research and training planned and driven by local scientists. Currently, initiatives in Chile, Brazil, and Mexico are underway, and initiatives are being planned in sub-Saharan Africa and Vietnam.

He has received a host of honours including election to the National Academy of Sciences (1979), the National Science Board (1991), the American Academy of Arts and Sciences (1995), the American Philosophical Society (1996), the Third World Academy of Sciences (2001), and the Accademia Nazionale dei Lincei (2001). He was awarded the LeRoy P Steele Prize from the American Mathematical Society (1971), the Dannie Heineman Prize from the Göttingen Academy of Sciences (1979), and the Brazilian Order of Scientific Merit (Grand-Cruz) in 2002. He has received honorary degrees from Wake Forest University (1973), Angers University in France (1979), University of Peking (1983), and the University of Oslo (2002). Griffiths has received many more honours which we will have to omit through lack of space, but we should mention his role as Secretary of the International Mathematical Union from 1999 to 2006.
Other Mathematicians born in USA

Other pages about Phillip Griffiths:

Other websites about Phillip Griffiths: