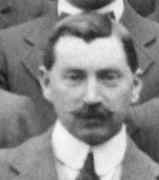 Alexander Durie Russell's father was Thomas Russell who was born in Ecclesmachan, West Lothian, a small village between Edinburgh and Linlithgow, on 6 October 1839 to James Russell and Elizabeth Aitken. Thomas, the youngest of his parents' five children, became a grocer. He married Janet Durie in Edinburgh on 23 August 1869. Janet was born in Midcalder in 1837 to parents Alexander Durie, a dairyman, and his wife Janet. Thomas and Janet Russell settled in Edinburgh after their wedding and in 1871 were living at 5 Salisbury Street, Edinburgh. Their first child James Russell was born in Newington, Edinburgh on 24 June 1870. He appears on the 1871 census but since we can find no further trace of him, it seems likely that he died as a child. Alexander Durie Russell, the subject of this biography, was born in Newington, Edinburgh in July 1872.

At the time of the 1881 census, the Russell family are living at 56 Clerk Street, Edinburgh. Alexander is a school pupil, his father Thomas is a grocer, but the family also have two lodgers, James Miller, a law apprentice, and David Murray Maxwell, a Law Clerk. By 1891 the family are living at 19 Graham Street, Edinburgh. Alexander is a university student, his father is a retired grocer, and now they have two boarders, William Asmit, a retired confectioner, and Peter White, a school pupil, as well as the lodger David Murray Maxwell, now a cashier in a Law Office, and Jeanie R Gordon, a visitor.

Let us go back a little and to look at Alexander Durie Russell's secondary schooling. He attended the famous George Heriot's School in Edinburgh where he was taught mathematics by John Brown Clark. He passed the Preliminary Examinations of the Scottish Educational Department in English, Mathematics, Latin, Dynamics, French, and German in June 1889 and June 1890. He first matriculated at the University of Edinburgh in October 1890.

Russell then studied Chemistry with Alexander Crum Brown, Mathematics with George Chrystal, Natural Philosophy with Peter Guthrie Tait, Botany with Isaac Bayley Balfour, and Natural History with James Cossar Ewart. He graduated with a B.Sc. from the University of Edinburgh in 1896. He was awarded the Neil Arnott Scholarship in Experimental Physics [2]:-

... Russell was educated at Edinburgh University, where he had a distinguished academic career. As an outstanding student he was selected to serve for a period at the Ben Nevis Observatory (now disused) as a mathematician.

Let us look briefly at the Ben Nevis Observatory. Ben Nevis is the highest mountain in the British Isles, with a height of 1343 m. The prevailing winds come across the Atlantic and strike the mountain so, in the 19th century, it was an ideal place to have a meteorological observatory, particularly since there was a flat plateau at the top where the Observatory could to sited. First proposed in 1877, funded mostly by private donations, it was built and opened in October 1883. Conditions, particularly in winter, were very difficult for those working there with intense cold, deep snow and very strong winds. The staff took readings of observations. It is worth noting that the physicist and meteorologist, Charles Thomson Rees Wilson, worked at the Observatory around the time that Russell worked there. Wilson's observations at the Observatory led him to invent a cloud chamber to detect ionising radiation which, in 1927, earned him the Nobel Prize.

After working for a year as a Demonstrator in Physics at the University of Edinburgh, Russell was appointed to Morelands School, Edinburgh, where he taught mathematics for one year. He then became a Mathematics Master at Stranraer High School, Wigtownshire, teaching there for two years. In 1899 he became a Mathematics Master at Falkirk High School, Stirlingshire. This was quite a new school when Russell was appointed there, for it had been founded in 1886. Later, he was promoted to Head of Mathematics at Falkirk High School. He remained there for the rest of his career, retiring in 1937. He received considerable praise or his teaching [2]:-

Russell was a born mathematician, and had a gift for imparting his enthusiasm for mathematical studies to his pupils, many of whom benefited considerably from contact with his first-rate mathematical mind.

A similar assessment appears in [1]:-

In Falkirk, he rendered signal service to the High School and also to the Science and Art School, where he conducted continuation classes. He proved himself to be an inspiring and successful teacher, and his contribution to the general good of the Falkirk district would be hard to overestimate.

The Falkirk Science and Art School was slightly older than the High School, being officially opened in September 1878. Falkirk played a big part in the Industrial Revolution in Scotland and was a major centre for iron casting. The Science and Art School was intended to train workers in the iron industry giving them both technical and artistic skills. In 1889, however, it merged with the High School but continued classes for iron workers. Russell taught both school children and iron workers.

Although Russell was teaching in Falkirk from 1899, at the 1901 census he was living with his parents at 3 Bernard Terrace in Edinburgh. David Murray Maxwell was still a lodger and Russell's father, Thomas, is now listed as a fish merchant. In fact at the time of the 1911 census he is still living with his father in Edinburgh, but by that time his mother had died. On 12 April 1930, Russell married Margaret Wilson Swan Fisher in Blythswood, Glasgow. Margaret (1898-1958), the daughter of James Fisher and Isabella Swan, was living at 3 Melville Street, Falkirk in 1901 and was brought up in Falkirk. She was the first of her parents two children, having a brother James born around 1905. In fact Russell was almost exactly the same age as Margaret's father James Fisher. Alexander and Margaret Russell were living at 14 Heugh Street, Falkirk in 1938, the house where Russell was living before his marriage since he gives this address in the list of Edinburgh Mathematical Society members of 1927. Rather strangely, they were living next door at 12 Heugh Street, Falkirk in 1941. By 1951 they were living at 3 Woodlands Crescent, Falkirk.

At the meeting of the Edinburgh Mathematical Society in February 1897 he became a member of the Society. He served on the Committee during 1906-09, was honorary treasurer during 1909-1915, and was then honoured with election as President for session 1915-16. He also contributed to the scientific work of the Society, for example he read the paper A special case of the dissection of any two triangles into mutually similar pairs of triangles to the meeting of the Society on Friday 8 December 1899. The paper was published in the Proceedings of the Society in 1900. We now list some of Russell's papers, with some extracts from Abstracts where appropriate.

His obituary in the Edinburgh Mathematical Notes is at THIS LINK.

In this obituary Russell is described as being [1]:-

... a keen churchman and was an elder of St Modan's Church, Falkirk. He was highly respected in the community for his personal character, ability and devotion to duty, and he will be greatly missed.

St Modan's Church, Falkirk has an interesting history through the time that Russell taught in Falkirk. About 100 members of the congregation of the Evangelical Union Church in Meek's Road, Falkirk, split away in 1896 and, in the following year, bought the old Evangelical Union building on Bank Street. They named it St Modan's in honour of the sixth century saint. They then proceeded to build a new church which was dedicated in 1915.

Russell retired in 1937 from his position of Head of Mathematics at Falkirk High School but continued his interest in mathematics publishing the occasional paper. He continued living in Falkirk at 3 Woodlands Crescent until a serious illness meant that he had to be transferred to a nursing home in Kelvingrove, Glasgow where he died in 1955 [2]:-

It was with deep regret that his many friends in Falkirk learned of the death, which took place in a Glasgow nursing home on 20 January 1955, after a painful illness ... Mr Russell is survived by his widow, to whom much sympathy is expressed in her bereavement.

Other Mathematicians born in Scotland
A Poster of Alexander Durie Russell

Other pages about Alexander Durie Russell:

Other websites about Alexander Durie Russell: